Full disclosure: I don’t like Rick Perry for our next president. I have my reasons that aren’t worth going into here. However, when I was watching the GOP debate and pro-Perry people started bringing up Rick Perry’s job numbers as a cudgel against other candidates, I looked into the BLS data on Texas jobs. Having familiarized myself with the data, I started noticing claims on the Texas jobs data that started popping up that directly contradicted what I was seeing in the data. So I wanted to clear up a couple of these common misconceptions.

Note: If you are going to comment and you want to introduce some new objection to the Texas job numbers, you MUST provide original data. I spent about 4 hours digging through raw data to write this post. I don’t want you to point to some pundit or blog post and take it on their authority, because I’ve already researched several idiot pundits who are talking directly out of their asses when it comes to the data. I want you to point to the raw data that I can examine for myself. This means links. I refuse to waste any more of my time on speculative bullshit or “Well, I’ll wager that the Texas jobs don’t really count because…” If you’re willing to wager, take that money and put it towards finding the actual data. In short, put up or shut up.

I’m not cranky, I swear.

Anyway, let’s deal with the complaints in no particular order:

“Texas has an unemployment rate of 8.2%. That’s hardly exceptional.”

So I was going to drive my point home that Texas was nothing special by looking at their raw employment numbers and reporting on those. That’s when I saw this:

This may not look like anything special, but I’ve been looking closely at employment data for a couple years now and I’ve become very accustomed to seeing data that looks like this.

In a “normal” employment data set, we can easily look at it and say “Yep, that’s where the recession happened. Sucks to be us.” But not with Texas. With Texas, we say “Damn. Looks like they’ve recovered already.”

But if Texas has so many jobs, why do they have such a high unemployment rate? Let’s take a closer look at that data.

As a percentage of the number of pre-recession jobs, here is a chart of the growth of a selection of states. (For clarity, in this chart I selected a number of the largest states and tried to focus on states that have relatively good economic reputations. I did not chart all 50 states b/c it would have taken me too long.) 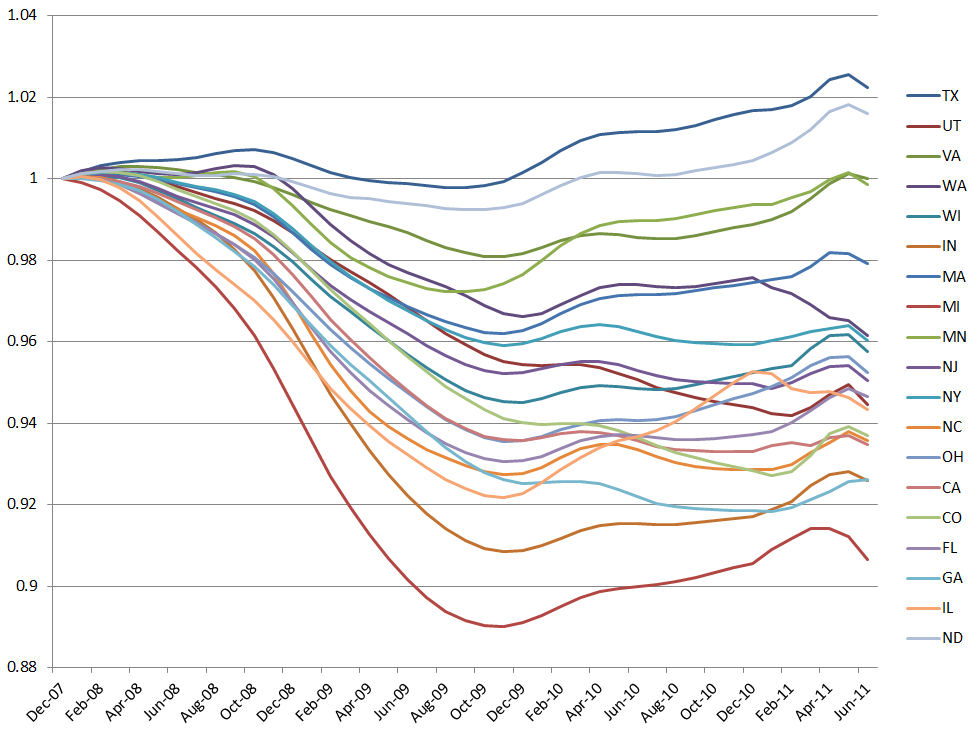 We can see that Texas has grown the fastest, having increased jobs by 2.2% since the recession started. I want to take a moment and point out that second place is held by North Dakota. I added North Dakota to my list of states  to show something very important. North Dakota currently has the lowest unemployment rate of any state at 3.2%. And yet Texas is adding jobs at a faster rate than North Dakota. How can this be?

The reason is that people are flocking to Texas in massive numbers. Starting at the beginning of the recession (December 2007), let’s look at how this set of states have grown in their labor force. 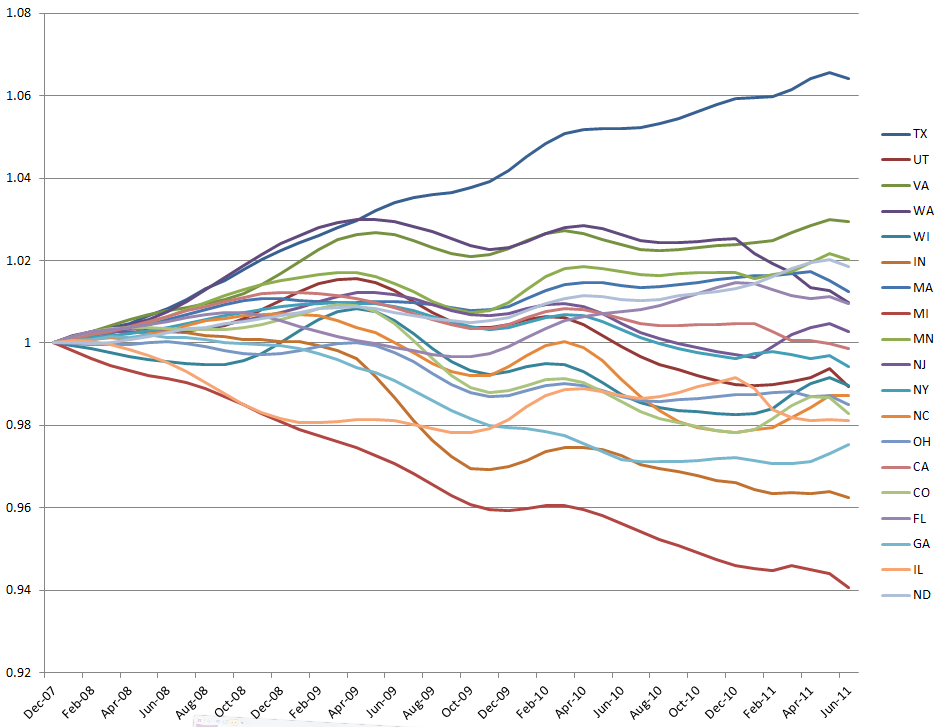 As you can see, Texas isn’t just the fastest growing… it’s growing over twice as fast as the second fastest state and three times as fast as the third. Given that Texas is (to borrow a technical term) f***ing huge, this growth is incredible.

People are flocking to Texas in massive numbers. This is speculative, but it *seems* that people are moving to Texas looking for jobs rather than moving to Texas for a job they already have lined up. This would explain why Texas is adding jobs faster than any other state but still has a relatively high unemployment rate.

“Sure, Texas has lots of jobs, but they’re mostly low-paying/minimum wage jobs”

Let’s look at the data. Here’s a link: Occupational Employment and Wage Estimates

Texas median hourly wage is $15.14…  almost exactly in the middle of the pack (28th out of 51 regions). Given that they’ve seen exceptional job growth (and these other states have not) this does not seem exceptionally low.

But the implication here is that the new jobs in Texas, the jobs that Texas seems to stand alone in creating at such a remarkable pace, are low paying jobs and don’t really count.

If this were true, all these new low-paying jobs should be dragging down the wages data, right? But if we look at the wages data since the beginning of the recession (click to enlarge, states are listed alphabetically) 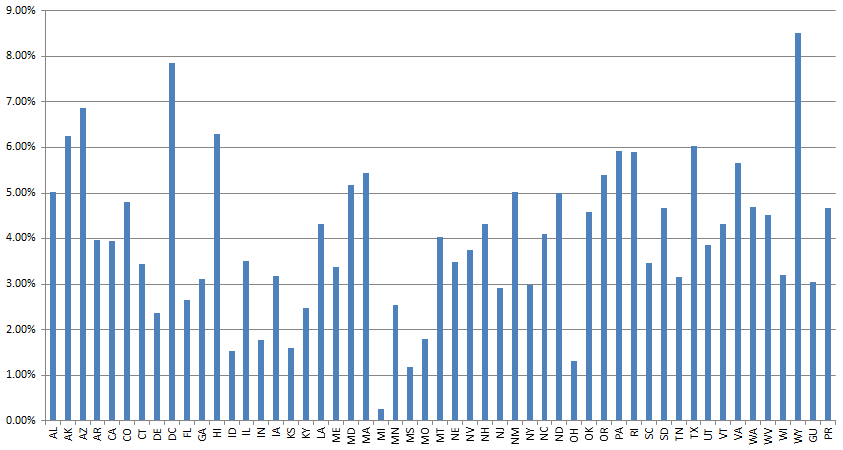 And it turns out that the opposite is true. Since the recession started hourly wages in Texas have increased at a 6th fastest pace in the nation.

As a side note, the only blue state that has faster growing wages is Hawaii. Just thought I’d get that jab in since so many people have been making snarky “Yeah, I could get a job in Texas is I wanted to flip burgers!” comments at me on Twitter.

“Texas is oil country and the recent energy boom is responsible for the incredible jobs increase.”

In identifying “energy jobs” I cast as wide a net as possible. If you want to replicate my findings, go to this link: http://www.bls.gov/sae/data.htm, click on “One-Screen Data Search”, then select “Texas”, then select “Statewide”, then in Supersectors select “Mining and Logging”, “Non-Durable Goods” and “Transportation and Utilities” and then in Industries select “Mining and Logging”, “Natural Gas Distribution”, “Electric Power Generation” and “Petroleum and Coal Products Manufacturing”.

Tedious, I know, but transparency is important and this is how you get the data.

When we finally get the data, we discover that energy isn’t really the biggest part of the Texas economy. Increases in jobs in the energy sector (or closely related to it) account for about 25% of the job increases in the last year. Since the energy sector only makes up 3% of all employment, there is some truth to this claim.

However, take the energy sector completely out of the equation and Texas is still growing faster than any other state. This indicates to us that the energy sector is not a single sector saving Texas from the same economic fate as the rest of the states. It’s not hurting, but Texas would still be growing like a weed without it.

I’m not sure where this one comes from, but the numbers are these (and can be found by selecting government employment from the data wizard at this link http://www.bls.gov/sae/data.htm):

Counting from the beginning of the recession (December 2007) the Texas public sector has grown 3.8%, or a little under 70,000 employees. This is faster than normal employment, but it’s not off the charts.

Given that the Texas economy has grown so much and private sector jobs have grown so much, that doesn’t strike me as an unsustainable growth in the public sector.

But, just in case you’re really worried about it, you can lay your fears to rest because in the last year the Texas public sector has shrunk by 26,000 jobs. In the last 12 months, Texas lost 31,300 federal employees, trimmed 3,800 state jobs, and increased local government jobs by 8,400 jobs.

(To be fair, this was partially driven by the role Texas employees played in the census, which inflated federal job numbers this time last year. Since the census numbers stabilized, federal employment has been at about break-even.)

I’ll leave you with my personal favorite chart. I mentioned at the beginning that Texas is seeing high unemployment in a large part because they’re growing so damn fast. The problem with this from a charts and graphs perspective is that it leaves worse states off the hook, making them look better than they actually are. Looking at unemployment alone, we would conclude that Wisconsin has a better economy than Texas. But Wisconsin is still 120K short of it’s pre-recession numbers. The only reason they look better than Texas is because 32,000 people fled the state.

During that time, 739,000 people fled into Texas. Anyone who takes that data and pretends that this is somehow bad news for Texas is simply not being honest. At the worst, I’d call it a good problem to have.

So, to give something of a better feeling for the economic situation across states, this chart takes the population of the states I selected above and judges the current job situation against the population as it stood at the beginning of the recession. 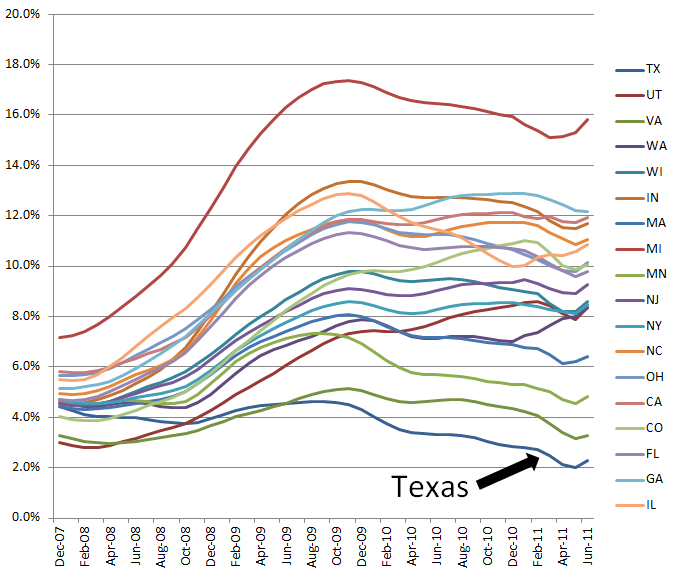 Using that metric, Texas would have a very low unemployment rate of 2.3%. But the fact that unemployment in the United States is fluid means that the unemployed flock to a place where there are jobs, which inflates its unemployment rate (at least in the short term). It’s not a bad thing for Texas… it just looks bad when dealing with the isolated “unemployment %” statistic.

UPDATE: @francisgagnon on Twitter felt that this chart was dishonest because it charts Texas as having 2.3% unemployment and (in his words so I don’t get him wrong): “It assumes immigrants create no jobs. But more people = more consumers = more jobs.”

You may have noticed that I don’t mention Rick Perry very much here. That is because Rick Perry is, in my opinion, ancillary to this entire discussion. He was governor while these these numbers happened, so good for him. Maybe that means these jobs they are his “fault”. Maybe the job situation is the result of his policies. Or maybe Texas is simply the least bad option in a search for a favorable economic climate.

That is not an argument I’m having at this exact moment. My point is to show that most of the “excuses” you will hear about Texas’ job statistics are based in nothing more than a hope that Rick Perry had nothing to do with them and not on a sound understanding of the data.

My advice to anti-Perry advocates is this: Give up talking about Texas jobs. Texas is an incredible outlier among the states when it comes to jobs. Not only are they creating them, they’re creating ones with higher wages.

One can argue that Perry had very little to do with the job situation in Texas, but such a person should be probably prepare themselves for the consequences of that line of reasoning. If Rick Perry had nothing to do with creating jobs in Texas, than why does Obama have something to do with creating jobs anywhere? And why would someone advocate any sort of “job creating” policies if policies don’t seem to matter when it comes to the decade long governor of Texas? In short, it seems to me that this line of reasoning, in addition to sounding desperate and partisan, hogties its adherents into a position where they are simultaneously saying that government doesn’t create jobs while arguing for a set of policies where government will create jobs.

People will continue to argue about the data. But hopefully this will be helpful in sorting out reality from wishful and desperate thinking. I mentioned on Twitter that the Texas jobs situation was nothing short of miraculous. This is why I said that and why I’m standing by that statement.