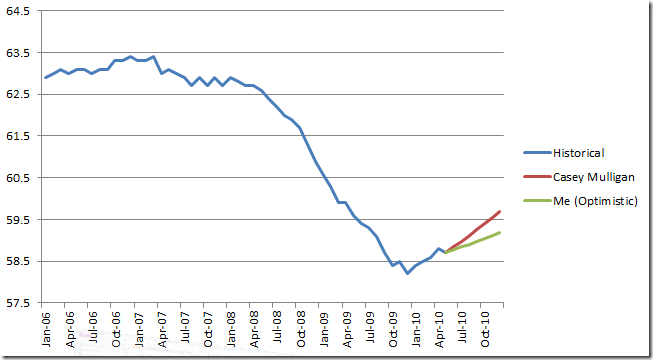 My Dance Of Humility Before Robert Stacy McCain

Back at the beginning of September, Robert Stacy McCain stated that:

The FHA is on the hook for lots of “underwater” loans, taken out by low-income homeowners who got special low down-payment deals and — in case you didn’t notice — unemployment hit a 26-year high in August, with no prospect the 9.7% jobless rate will go down any time this year.

If unemployment dips below 9.7% by the end of the year, I will make a point that your enormous confidence in the suckiness of the economy was misplaced.

If it does not, I will write a humble post begging your forgiveness. I’m curious to see how this goes.

Therefore, I take note that Stacy McCain predicted the trajectory of the economy more accurately than I would have. I humbly beg his forgiveness.

I would like to take a moment, though, and explain why I wrote that post in the first place.

I am fascinated by neurology… particularly how the brain forms memories and how those memories interact with reality. The evidence that pretty much everyone has false memories (where we can vividly remember things that didn’t happen) is overwhelming. What I’ve found in the last 10 years of following politics is that this area is particularly vulnerable to people saying things about the past that they totally believe are true but are, in fact, based on a narrative that was established after the fact.

People look back in hindsight and say “Well, of course John Kerry was a terrible candidate.” But they’re only saying that because he lost. If he had won, the narrative would have been established that he was the right guy at the right time who ran a campaign of brilliance with these subtle nuances that connected with the people. We have this certain sense of fate through which we look as if the world we live in was one of inevitability and we realign our perspectives and (frighteningly) our memories to align with reality as it turned out.

That’s why I love the internet and blogs in general. I love to take the feeling understanding of a certain time and place and write it in stone. Looking back at September now, it seems obvious that we weren’t out of the woods at the time. But it didn’t seem obvious to me or to a large chunk of those writing about the economy.

That the unemployment situation was still on the downturn seemed obvious to Stacy McCain and at the time I was struck by how different our expectations were. Some people will look back at his post and say “Well, of course the unemployment rate wasn’t going to decrease. Everyone knew that.” This post is to point out that not everyone knew that and that it wasn’t an obvious thing. We shouldn’t discount those who are right about something because the narrative has made their very gutsy prediction seem obvious.

It’s worth keeping record of our reactions at the time and comparing them to how the world turned out. It’s worth pointing out when someone is able to make an accurate prediction. And Stacy McCain had me on this one.