What Happens to Unemployment Tomorrow?

Just thought I’d post this. I’ve always been a little fascinated by the number of people needed to pull off something as huge as a the census. And next month we should see the peak of the census employment burst. Observe: 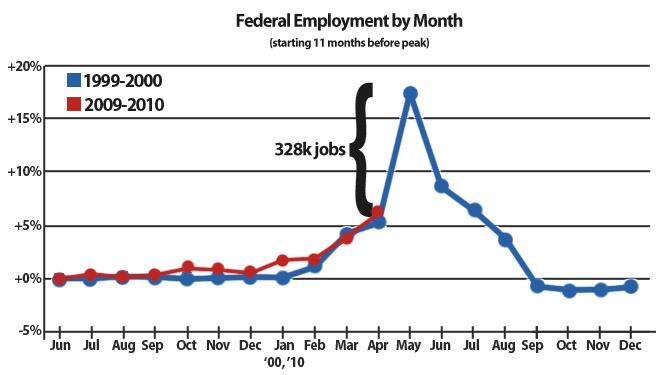 This was done in about 20 minutes, so it might need some explanation.

Basically, I start with with the June before the census and mark that number (somewhat arbitrarily) as my base federal employment point. Then I checked the employment numbers moving forward from that point as a percentage of that number.

As you can see, if this census year follows the path of the last census year (which it seems to be doing so far) the May employment number coming out tomorrow should add around 300-350 thousand jobs due to the census alone.

How big is a 300-350 thousand job increase? Well, the increase in employment as a whole between March and April was about 250 thousand. So, if the recovery continues as it has been, we should see an increase of something along the lines of 500-600 thousand jobs tomorrow.

Take note, I’m doing really simple guesswork here. I’m pretty sure that geoff over at Innocent Bystanders will have more intelligent things to say on the matter tomorrow.