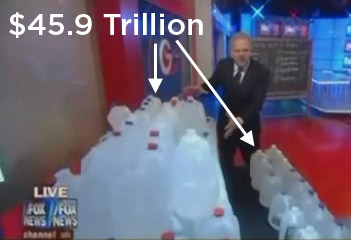 The first part of this post is just an overview of the data I used to make this video, so if you don’t care about that, you can skip over it to the part where I talk about what the budget freeze means.

First, I’ve got a new video up called “What Does The Federal Budget Freeze Look Like?”

Here is the data summary of this video:

I got the budget numbers (budget, discretionary, mandatory) from the overview of the 2010 budget which includes projections for 2011. I did this because the 2011 budget is not available yet (although I understand that those projections are a bit low and the real budget will be bigger than the projection).

That gives us the following numbers:

The stimulus funds as reported by recovery.gov at the time of this post are: 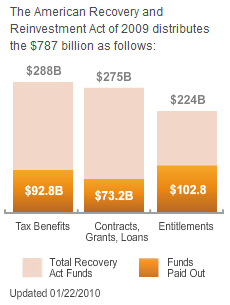 If we left the tax cuts in place, but canceled the rest of the spending, we’d save $323 billion… which is a shade less than what I said in the video. Apparently, that is the result of some rounding errors in my spreadsheet, but the $4 billion comes out to about one and a half teaspoons, which isn’t enough to make a difference in the visualization.

As for the water part of it… If we assume that the budget is 192 ounces of water that we’ve split into 4 oz cups, then all the math in the video works out. I actually under-counted the unspent stimulus (it would be 17 ounces instead of 16). I measured my ice cube tray and found that each ice cube was 1.5 ounces and I used 1 and a half tablespoons of water to measure out the .75 ounces that would be equivalent to $15 billion.

OK… now to comment on what I think about the budget freeze to anyone who cares what I actually think.

First of all, I hate the “we’re saving $250 billion over 10 years” line. It is a piece of crass political rhetoric and I’m disappointed that the administration would use it. If they actually implement a three year freeze on the portion of the budget they’re talking about (which is a big if, but let’s assume the best), why measure the effects in the space of 10 years?

The answer is “To make the freeze look bigger”. They’re basically just basing the extended savings off of projected interest payments and “savings” due to the fact that the baseline on that portion of the budget hasn’t moved. It is setting a dangerous data precedent where politicians realize that all they have to do is calculate a projection out as far as they need in order to get the numbers they want. It would be like giving an employee a $5,000 bonus, but saying that you gave them a $8,000 bonus based on a 5% return of that investment over the course of 10 years.  They might as well say that they’re saving a trillion dollars over the next 25 years or a hundred trillion over the next 300 years. It is a data statement designed to trick people.

Second, I hate the “We’re saving all this money by not spending it” line because it is similarly political. If a future politician wants to play this stupid numbers game, all they have to do is “project” that they will spend like a crazy person next year and when the next year comes, they decided to spend like a half crazy person. Then they can claim that they have “saved” all this money because they “reduced” their projected spending.

As a slapdash example, a politician could project that they will increase spending by 5% next year and then decide at the last moment to increase it by 3%. They could then spin that decision to increase by a smaller amount as a decision to “cut” their spending (which wasn’t real spending, only projected spending) by 2%.

Last, my attempt to visualize the scale of the budget freeze does not mean I don’t support it. I really like to see cuts to the budget and I personally think this is not an insignificant one.I think it is worth our energy to do exactly what the Obama administration seems to be doing…freezing increases and looking around for crappy programs to cut.

Keep in mind the hypocrisy on both sides of the aisle. The Republicans are hypocrites for claiming that this is a totally inconsequential budget cut. In 2005, George W. Bush proposed a 1% cut (not a freeze, a cut) in discretionary spending that wasn’t Department of Defense or Homeland Security. Translated to today, Bush’s cuts would have “saved” $33 billion using the calculation metric for the current freeze; more than twice the amount that this freeze would save us. At the time, John McCain called it a “very austere budget” and Dick Cheney went out pushing their credentials as cost cutters. I find it strange that they were ecstatic about saving the equivalent of $33 billion but think that $15 billion is a drop in a bucket.

Of course the Democrats blasted Bush’s cuts as a gimmick too small to make a difference, but seem to have lost much of their skepticism over these new, smaller “cuts”.

Overall, it looks like both sides are more interested in political gain than in having a frank discussion about the numbers and what they mean. This should surprise no one, but I confess to finding myself somewhat dismayed that the Obama administration, for all their hype about being pro-science and pro-data, has no problem spinning the numbers in a way that decreases clear comprehension in order to increase message potency.