This is one of the Goose/Gander Visualization Series.

These attacks got me thinking about executive job records.  “Where” I asked myself  “would President Obama place in a ranking of US Presidents in terms of job creation?” 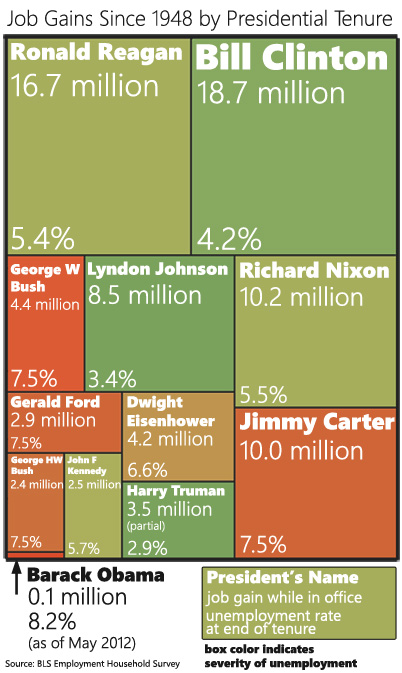 You can also download a larger version of the chart. I find it difficult to create visualizations that work well in both blog form and Facebook-sharing form. This was my attempt at a compromise.

Is this a fair comparison? Yes and no. Part of the Goose/Gander series is that I create a provocative visual and then explain in more details what is fair and isn’t fair about it.

President Obama hasn’t had a full term yet

This puts him at a distinct disadvantage to everyone else (except John F Kennedy) because he hasn’t had the same amount of time to grow jobs. However it also seems pretty obvious that he’s not going to get out of last place before January 2013. That would require 300K new jobs per month every month from now until then.

President Obama came into office in the middle of a recession

In fact, he came in the middle of a recession that was worse in terms of job loss than anything any other president in this chart had to deal with. Now, he did split those job losses about half-and-half with George W Bush, so it’s not as bad as it could have been for him.

Presidents only have a certain amount of control over job growth

Actually presidents (and executives in general) only have a certain amount of control over the economy, so this entire exercise is kind of tainted by that fact. But this is the part where we point out that Obama did start this by attacking Mitt Romney’s job record in a similar way.

The data Is Unassailable

I’m using the Employment table from the BLS A Tables. This is not the one that most Obama proponents prefer to use. They prefer using the BLS B Tables because they give numbers that are kinder to Obama. But the B Tables undercount employment (they only count payrolls) and everyone knows this.

I counted January-January (or whenever the president left office) for each president. I did this not because it was particularly fair but because I wanted to match how Obama has assigned himself and Romney jobs responsibility. I’m following his lead to show that, if we take him at his word, he doesn’t stand up to his own standard.

If we’re going to play the presidential job visuals game…

… this is a totally fair visual to keep in mind. Depending on the metric, Obama talks about jobs in different ways. When talking raw numbers, he likes to talk about the “last 22 months” or however gets us to the low point in the recession. When talking about month-to-month change, he likes to talk about when he came into office which was the worst point of job loss in the recession, so everything else looks good in comparison.

Fairly or unfairly, Presidents and jobs are commonly linked. It’s only fair to give a proper representation of that information. 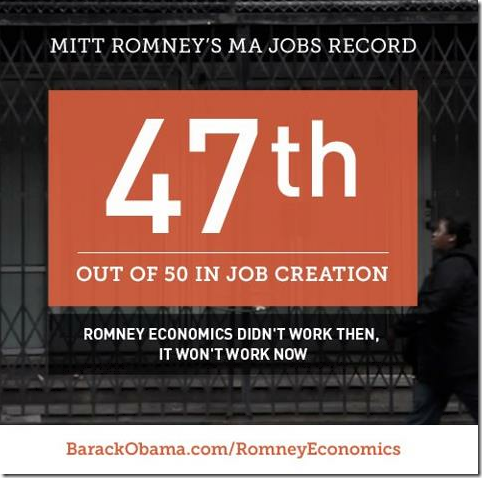 I’m giving a talk today on visualizations at the Franklin Center Journalism Summit and I wanted an easy way for the participants to see all the links I reference.

Here is the presentation:

And here are links to all the example visualizations in the talk.

The Buzz vs. The Bulge

May BLS data in CSV (Excel)

Map of the Market

Finding Bigfoot (made with Tableau)

US map by state (SVG)

US map by county (SVG)

US map by congressional district(SVG)

How different groups spend their day

Welcome to WordPress. This is your first post. Edit or delete it, then start blogging!

I’ve been a bit of a slacker, but I’m trying to get back on wagon.

March April and May combined had about as much job growth as January. Ouch #BLSFriday

We need over 200K payroll growth per month. The last 2 months combined were 146K #BLSFriday

The real bad news: This isn’t isolated. This is the 3rd month in a row of weak job reports. #BLSFriday

This is the worst employment report since last May. So maybe it’s cyclical. (Probably not though) #BLSFriday

I expected a tepid employment report, over 100K but under 200K. Not this. Blech. #BLSFriday

Maybe the farm payrolls report is really good this month?