I don’t normally allow guest blog posts because… well, mostly because I’m a jerk and I like to keep my blog all to myself. But then I read this post on Chris Mooney’s upcoming “The Republican Brain”. It’s part of an on-going liberal “Science says that Republicans (or conservatives or religious people) are dumb (or driven by fear or some other negative neuro-psychological phenomena)” talking point.

So I asked my brother (a neuroscientist entering med school this fall) to take a look at the piece and comment on it. What you’ll find below is his response. If you look at nothing else, check out the chart where he suggests other liberal/conservative conclusions based on the same “evidence” Mooney uses to bolster his “science-y” nonsense.

Whenever I see a study claiming “science proves XYZ about conservatives (or liberals)”, I roll my eyes and sigh. There is currently a problem of misuse and mis-referencing academic and peer-reviewed articles for the purpose of substantiating an argument or point-of-view that is already held by those offering up these studies. For those who use scientific results to convince their audience as part of a job, this amounts to nothing short of inherent bias, a position that is staunchly avoided and rejected by reputable scientists. Pervasive ignorance is nothing new, but with the advent of the internet the ignorant have easy access to science that is outside their area of expertise (or amateurism for that matter) and the misuse of science as a tool for manipulation has made the function and even purpose of the original studies grossly misunderstood.

Our example for today comes from an article published in Salon entitled “The Republican Fear Factor,” by Joshua Holland. In this article, Holland cites a recent study in Current Biology on the gray matter volume from individuals of different political persuasions. Holland points out that “the amygdala is an ancient brain structure that’s activated during states of fear and anxiety.” He then proceeds to interpret the results of aforementioned article (which finds that the amygdala is enlarged in conservatives compared to liberals) are evidence of conservatives living in a world of fear, even calling the world from a conservative’s perspective to be a “nightmarish landscape.”

The article continues in the now common, though still unpredictable, ramblings of the politically entrenched ideologues who are convinced all science (reason, common sense, credible faith, or any other citation used as a source of truth) supports their position. Often such overzealous ideologues attempt to discredit any source that contradicts their position, making manipulation of information their primary weapon for influence. This is not to say that idealists are categorically given to this tendency, nor is this any attack on ideals themselves. This critique is directed entirely at ideologues, i.e. those *blindly* committed to their belief systems who leave no room for discussion or counter-positions—these are the most common culprits.

While Holland and Mooney can be given credit for citing not just one, but two (TWO!) whole studies from reputable sources, their understanding of neuropsychology and scientific studies is patently flawed, evident from his misinterpretation of the findings. While I am by no means an expert in the field, I have an advantage over Holland: this actually *is* my field. I have five years of graduate/postgraduate experience in neuroscience research, with multiple publications in peer-reviewed journals. Holland’s handling of this study is such a far-cry from the kind of discussion these results would inspire in academic circles that addressing his article does not require an expert, just experience.

The Problem With Neuroscience and Journalists

While this is not meant to be an exhaustive analysis, I’ll identify some major, obvious problems with his interpretations. There is no brain structure that can be summarized completely in just a couple of sentences. Neither does there exist a higher-order brain structure to which we could attribute a complete understanding of its functions. It is true that the amygdala is activated in states of fear and anxiety. I’m not sure why Holland cites Chris Mooney, a journalist, for further explanation of the function of the amygdala. While Mooney works with scientists, it is in the art of communication; Mooney himself has no substantive background in science according to this free background check service.

Holland could have found a renowned biologist and biochemist such as Leon Kass who pointed out that “the neuroscience area—which is absolutely in its infancy—is much more important than genetics,” Gerald D. Fischbach who said that “The brain immediately confronts us with its great complexity. The human brain weighs only three to four pounds but contains about 100 billion neurons. Although that extraordinary number is of the same order of magnitude as the number of stars in the Milky Way, it cannot account for the complexity of the brain,” or even an expert on information processing, such as the Emerson Pugh who wisely pointed out that the “If the human brain were so simple that we could understand it, we would be so simple that we couldn’t.”

I suspect I know why he didn’t cite these scientists: neither Holland nor Mooney are out to educate the public with this article, to fill the world with knowledge. This article is about winning, about attacking the enemy until it appears as defeated, inferior and cowering in its own nightmarish landscape. Citing an ideologue who agrees with him is easier than citing a scientist who will readily tell you that things are more complex than that.

If We Accept That Logic…

The results of this study suggest that there is a correlation between conservatism of the individual and gray matter volume of the amygdala. Using peer-reviewed journal articles, let’s look at a few other things that have this kind of association… 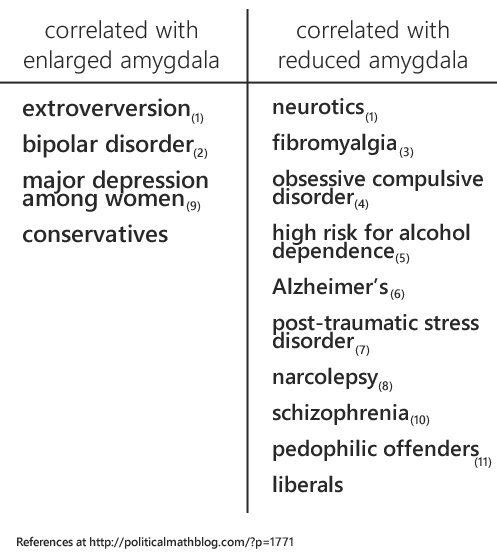 If we interpret this in the same way that Holland did, by oversimplifying the brain into one concise function, then we can say that extroverts and those with bipolar-disorder are extra fearful and more likely to be conservatives. Similarly, those with narcolepsy, schizophrenia, obsessive-compulsive disorder, high-risk for alcohol dependence, Alzheimer’s, post-traumatic stress disorder, major depression, and pedophilic tendencies have significantly reduced fear (and probably more likely to be liberal).

Do Republicans Live In A Nightmarish Landscape?

Allow me to emphasize one group: those with post-traumatic stress disorder have reduced gray matter volume. For those unfamiliar with the symptoms of PTSD, the most common include:

1. “Reliving the event, which disturbs day-to-day activity,” which including repeated nightmares of the event and strong, uncomfortable reactions to situations that remind you of the event.

2. Avoidance, which includes “Emotional “numbing, or feeling as though you don’t care about anything.”

3. Arousal, which can include “having an exaggerated response to things that startle you… feeling more aware (hypervigilance)… feeling irritable or having outbursts of anger.”(13)

Using the same logic, one could just as easily argue that taller people are naturally better at basketball. Basketball players have shown increased volume in their legs and hands over the average population. Since the legs have been determined scientifically to be the primary source of jumping and running and the shooting hoops occurs predominately with hands, we can conclude…

I looked only at the amygdala here because I’m lazy (and because the blog owner didn’t want me to attack the Holland’s other issue with the of the anterior cingulate cortex in a single blog post).

The point (and truth) is that we’ve got a lot of good ideas about some areas of the brain. It is absolutely true that the amygdala is activated in fear and anxiety responses. However, to say that this is *the* function of the amygdala or that increases in the size of the amygdala indicate a worldview that is warped by fear is journalistic extrapolation based on a pre-determined bias, nothing more.

I am confident that conservatives may react to fear differently than liberals. As indicated in the second study, conservatives look toward fear while liberals look away (14). This may be somewhat related to the higher ratio of conservatives to liberals among our armed servicemen and women—those whose job it is to run toward dangerous, fear-inducing conflict rather than away. Is this tendency to focus on sources of fear a weakness?

As an aside, I find it unprofessional that Holland is citing a Huffington Post article about this study (written and interpreted by our journalist friend, Mooney) without any link/citation to the study itself.

The eagerness to use the results of these studies to justify his position would be laughable if the general population didn’t find neuroscience to be beyond their grasp. As it is, it can barely be said that a basic understanding of neuroscience is within the grasp of even today’s renowned neuroscientists—and they’ll tell you that themselves. The point is that interpreting science is difficult, answers are not easy to come by, and almost nothing is as simple as online political editorials would have you believe.