UPDATE: Nate Silver pointed me to the BLS extrapolation of their population adjustment data (Table C at the bottom of this release). Long story short: the 1.2 million change in “Not in the Labor Force” is due entirely to the population adjustment and is not (as I assumed when writing this post) a straight across-the-board proportional increase. From December-January, we actually saw a “Not in the Labor Force” decrease which would mean people returning to the workforce. This is awesome. I’ll leave this post here as a testament to my own ignorance.

BLS data came out today and, if you follow me on Twitter, you’ll know that’s kind of “my thing”. I tried to explain this in tweet form, but it requires a bigger canvas.

There was some noise made today that we say “1.2 million people drop out of the workforce”. Zero Hedge and Iowahawk, both of whom are usually really good with numbers, made this claim.

And I want to explain why that isn’t so.

First, let’s look at where that number comes from. In the BLS Employment tables, there is a stat called “Not In The Work Force”. That number rose from 86.7 million in December 2011 to 87.9 million in January 2012, a rise of 1.2 million in one month.

Usually, when I talk about “people dropping out of the labor force”, I’m talking about the actual stat “Civilian Labor Force Level” decreasing as a raw number. This isn’t what happened. In fact, the Labor Force jumped half a million between December and January (the third biggest jump since the recession began).

The answer lies in the population. Normally population increases are a super-boring statistic in the job report. They always go up about the same amount, 150K-200K per month. However, the BLS does an annual adjustment every January. The last two adjustments have been downward, but this January, the adjustment was a huge upward one. 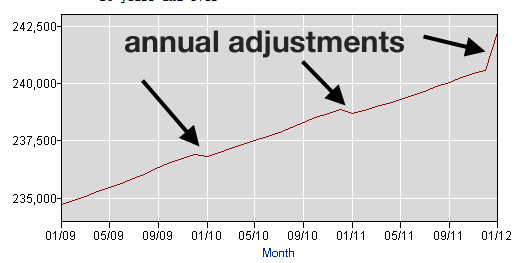 Now, the concerning thing about this adjustment, and the only mote in an otherwise spotless jobs report, is the distribution of this adjustment. We have a labor force participation rate of 63.7% (which is very, very low). If we add a hundred people, ideally we’d like to see at least 64 of them added join the workforce (to keep that participation rate up). We want to see the labor force grow at least on the level of the population.

Instead, what we got was this: 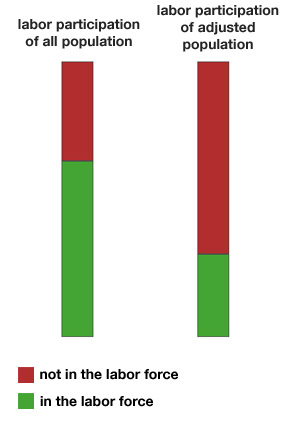 The BLS added 1.6 million people to the population number but only 30% of those were added to the Labor Force. That’s upside down from what we should expect in a normal adjustment.

Now… what does this mean?

Here is my theory based on how I understand the stats work.

I did some rough calculations (adjusting the December population upwards so that it more closely matches the January population) and, if we smooth the population adjustment, the jobs report looks less rosy. It looks like we lost another 450K from the labor force, which accounts for nearly all of the drop in unemployment.

The complicated nature of these numbers means that this observation won’t get very much traction (and, honestly, I’m not 100% convinced I’ve accounted for everything so maybe it shouldn’t) but it fits into the overall observation that employment increases are just not keeping up with population increases. I wouldn’t say this is alarming, but it is concerning.

Trying to get better at posting these soon after they are released.

For more information on this ongoing project of mine.