How To Cherry Pick Data

In his post “Senate Republicans Block Targeted Jobs Relief for Teachers And First Responders“, Matthew Yglesias points out that “during the Obama years” private employment has rebounded while government employment has seen a “sharp contraction”.

Yglesias points to a couple of charts, but I’ve helpfully replicated his data set into a single chart, because that’s just the kind of guy I am. 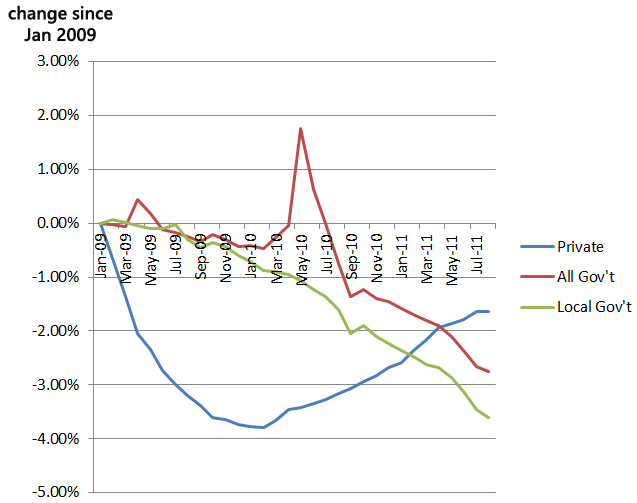 I thought that Schaeffer had a good point, but needed some visuals to drive it home, so I thought I’d show Yglesias’ jobs data in Schaeffer’s context. 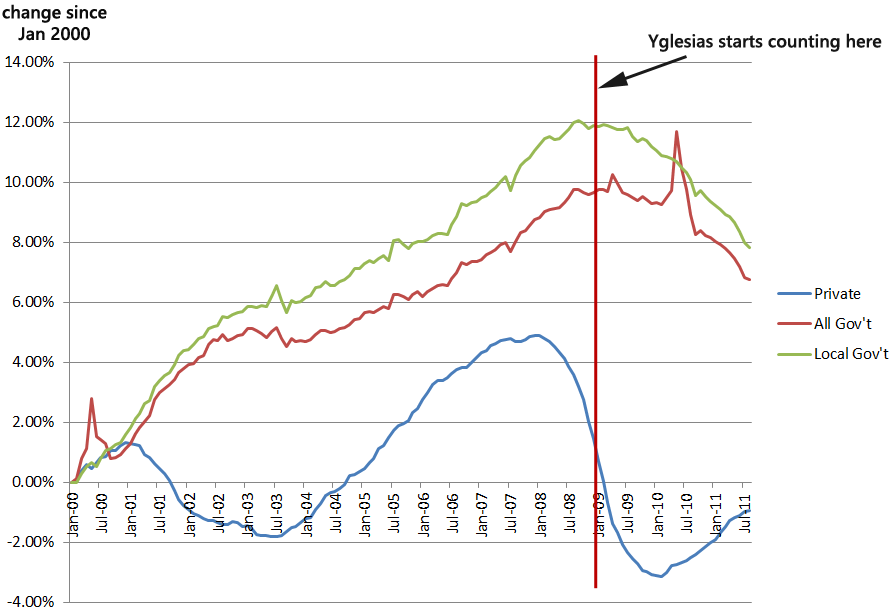 As you can see, Yglesias’ data starts at a really handy place for his argument, since it begins measuring job losses and growth at a time when we had already seen drastic private sector losses, but no public sector losses.

Ah, the little ironies of life.

Note: In the spirit of “never attribute to malice what can be explained by incompetence”, I wouldn’t be surprised if Yglesias unwittingly cherry-picked the data. “The Obama years” is a perfectly rational place to start looking at data and, if that was the only data you looked at, it would support his conclusion. On the other hand, Yglesias has always had a better grasp of the data than this particular post suggests, so I suspect he kind-of-sort-of knew that this was a cherry picked sample set but was OK with using it because it bolstered his argument.

How To Read Unemployment Reports

Every time a national unemployment report comes out, I tweet the many details from @politicalmath. Frequently I get a lot of the same questions, so I thought I’d jot down a quick summary on unemployment reports and numbers and where they come from.

There are 2 kinds of employment numbers, summarized here:

When an employment report comes out from the Bureau of Labor Statistics (BLS), they usually report:

Because the essence of the establishment jobs number is asking employers: “How many people work for you?” It gives a nice accurate number, but it doesn’t tell us anything about how many people don’t work for them. We don’t have any number on the unemployed, only a number for jobs.

For unemployment, we have to go to individuals and ask them: “Are you employed or unemployed?” Then we take the unemployed number and divide it by the total number of people who are in the labor force, which counts both the employed and the unemployed.

That’s a difference of 8.5 million jobs, and that kind pf spread is pretty normal. The variation changes a little month-to-month, but we could get a report of  jobs created from the household number and jobs lost from the establishment number. In fact, we saw something similar in August where the household number said we gained 331,000 jobs, but the establishment number said we gained 0.

So why is the establishment number reported?

Because the establishment survey is so much larger, more reliable and gives more consistent results. In the graph below , we can see that even though the establishment data counts fewer jobs, it is a less erratic count. 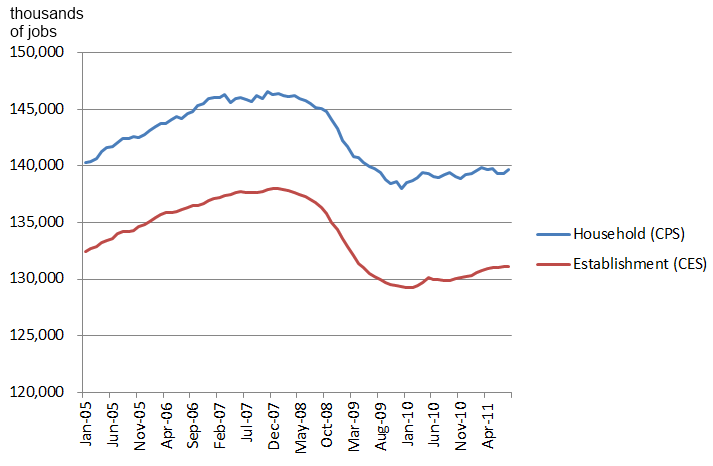 So… that is a quick explanation of the employment report. I dig into this data once a month, so I’m pretty familiar and I’m delighted to answer questions or explain in greater detail in the comments.