Charles Blow’s most recent New York Times op-ed is something of a boon for visualization enthusiasts. He replaces almost his entire article with a visualization. This illustrates that he recognizes power of visual communication to make and reinforce a point in a way that is self-obvious and can stick with the reader better than words.

Unfortunately, he has decided to use data that misleads his audience to such an extent that I can only conclude that he is unconcerned with the truth insofar as it undermines his desired objective.

Blow’s main point is that the US is an outlier in the world because we’re religious but also rich while “religiosity was highly correlated to poverty”.

I’ve reproduced the chart in question below. (Click to enlarge) 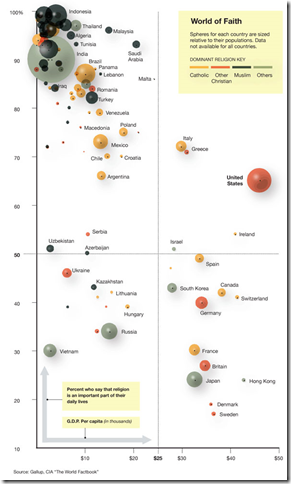 Now, keep in mind that this is not charting religion as it is listed in the CIA World Factbook, but according to the specific question: “Is religion an important part of your daily life?” That will be important in a little bit.

This chart seems to prove his point. Until you realize what isn’t on the map.

Here is a list of the countries that didn’t manage to make their way onto the map due to the fact that Gallup didn’t poll them:

Problem number one – Charles Blow has a duty to inform his audience of these omissions. The countries without data represent nearly 25% of the world population and skew heavily toward non-religious. They are too large and too important to the data set and visual reference to simply ignore. Yet Mr. Blow doesn’t seem interested in mentioning them.

Of course Mr. Blow could always go to rural India and inform them that their poverty is related to their devotion to Hindu and has nothing to do with British imperialism. Or perhaps to the deep south where he can proclaim to the +90% Christian black population that their economic woes are related to their religious tendencies.

Problem number 3 – But the final problem is the worst one because it involves an outright lie:

Singapore is more religious and richer than the United States. And Mr. Blow didn’t map it. At all.

It’s possible that Mr. Blow is actually so numerically illiterate that he didn’t know he was supposed to tell people about key missing data points. But taking out data that doesn’t align with his point is disgusting manipulation. The end result of his deception (conscious or otherwise) is “If you take out all the poor atheists and take out all the rich religious people, then this pattern emerges…”

Mr. Blow should put Singapore back in to the data set and add a correction to his article that announces how his data set has enormous gaping holes. And he should probably never be allowed to touch charting software again.

* The CIA Factbook has Taiwan listed at 93% Buddhist, but I’m not sure how they would answer the specific question that Gallup asked. I’ve heard some atheists claim Buddhism as an “atheistic religion” (no personal god) so it could be that the citizens of Taiwan wouldn’t say that religion plays a big role. I simply don’t know.