UPDATE: Wes at Pitch Interactive has left some comments with additional information on the data and visualization. I don’t agree with his opinion on the issue of contract spending (Does the federal government spend a disproportionate amount of defense? I don’t think the data supports that, but it depends on what your opinion of  “proportionate” and “appropriate” is.) , but you should definitely read his comments for a more complete understanding. He’s an excellent example of the government data transparency that we both endorse.

In the recent Design For America competition, a tie for first place was this very attractive visualization of Federal Spending. 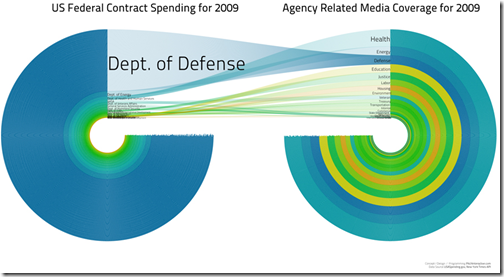 When the image won the contest, it was listed as a visualization of all federal spending. After a back and forth, the author at Pitch Interactive changed the title to “Federal Contract Spending” and has stated that he will revisit the visualization so that it shows all federal spending as it is reported at USSpending.gov. Pitch Interactive has gotten beaten up a great deal over this visualization and they have been nothing but gracious throughout. So I just want to take a moment to say that I think their work is remarkable and that the problems with this graph are a series of very honest mistakes.

But one of the things my blog does is point out mistakes to increase understanding.

My biggest problem with the image is that it still perpetuates the stereotype that the federal government spends most of its money on defense. This image in particular drives that point home by ranking the spending areas according to their “media coverage” ranking where we can see the extent of media coverage each department saw (based on the New York Times API). “Defense” reporting is clearly out of proportion to Defense spending.

The first problem has been addressed elsewhere… it’s the issue of scaling the radius instead of the area of the circles. If the numbers were a correct representation of federal spending (more on that later), the circle visualization commits this “radius is not equal to area” visual error that really bugs me. I even gave it a couple pages in my book chapter (now available online for the low, low price of free) and mentioned it in my Microsoft talk on visualization because it is such a common mistake. 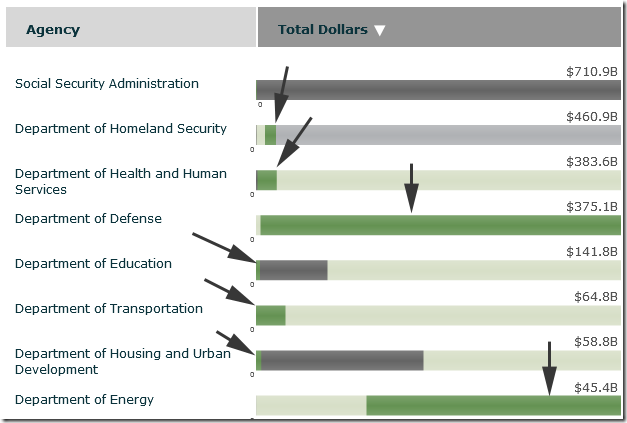 As you can see, this kind of visualization gives a very false impression of spending because Department of Defense spending is run almost exclusively off of contracts while Health and Human Services (which actually spent MORE money than the DoD due to the fact that it distributes Medicare and Medicaid) looks like a tiny fraction. The most expensive department, the Social Security Administration, doesn’t even show up in the visualization due to the fact that the money is all direct payments.

The reason this bothers me as much as it does is because the point of a visualization is to clarify and inform. One of the biggest pieces of MIS-information surrounding the federal budget is the idea that Department of Defense spending accounts for the majority of all spending. The reality is that Defense spending is about 17% of all federal spending (42%, if you only count discretionary spending and completely ignore Social Security, Medicare, Medicaid and interest on the national debt).

The original visual does the opposite of clarify and inform… it reinforces the misconception. The area that represents Defense spending is no less than 84% of total visual area! This isn’t just inaccurate, it’s exceedingly, painfully inaccurate. And, worst of all, it is inaccurate in a way that people will see it, allow it to reinforce their wrong perceptions and think that they know the truth.

But I’m a little bit shocked that the Sunlight Foundation didn’t catch these errors. It is clear to me that when Pitch Interactive gathered the data, they thought they were pulling ALL the federal spending and built the visualization off of that understanding. But Sunlight is supposed to be all about federal data. Anyone with even the most casual familiarity with the government spending data would immediately see that this visualization was in error.

Finally, it’s only fair that, after this criticism of this piece, I offer what I think is an accurate representation of the data. So I’ve re-built this visual with all the spending data and taking into account all the issues I’ve noted. Here is the fixed version of the graph (click for the large version). 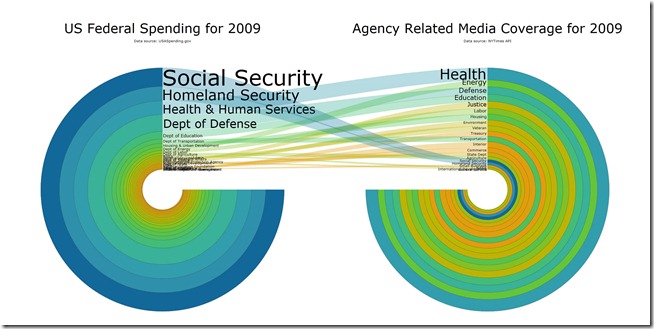