Can You Spot The Partisan Legislation?

UPDATE: I discuss the issue of partisanship and health care reform more here.

You may or may not know that one of the more entertaining themes running around the media these days is that the almost entirely Democratic passage of the health care reform bill is pretty standard issue for major social legislation. After all, the theory goes, Republicans never really supported any major social legislation and this bill was about as bi-partisan as it could get under the circumstances.

I try so very hard to stay out of name calling on this blog. But hearing people repeat this line is like hearing people talk about that alien they saw. Or, rather, they know this one guy who saw one and he was totally trustworthy. OK, maybe they didn’t so much know that guy, but a guy they know knew that guy and could get you in contact with him if they hadn’t lost his number. Perhaps the aliens stole it off his phone.

Back to the point.

We live in a world of accessible information. Quite frankly, if you’re too lazy to go look up the damn facts your own damn self you should probably make it a practice of just keeping your mouth shut. So when I hear people saying that this kind of narrow, one-party passage of major social legislation is par for the course, I look it up for myself. Guess what I found? Hint: Those people don’t check Wikipedia. 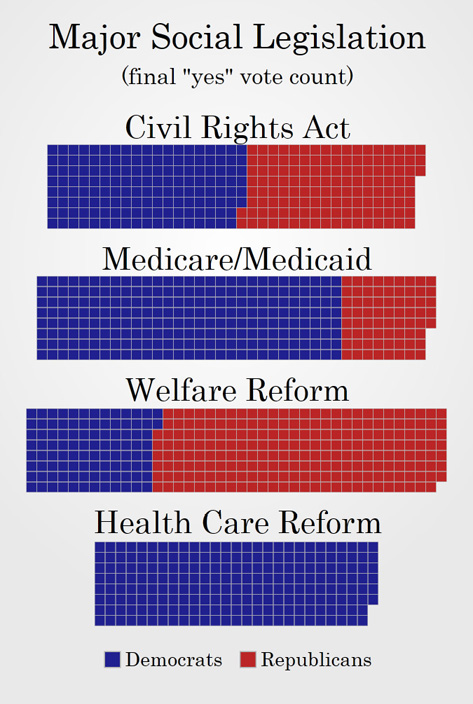 Download the large version, the medium version (seen above) or the small version.

By request I also have a version with the Yay and Nay votes together. 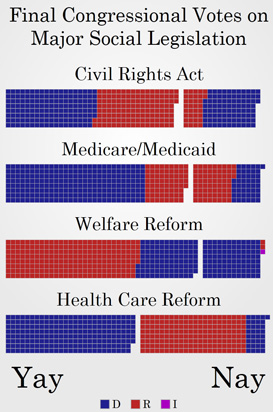 Download the large version, the medium version or the small version (seen above).

The point I’m trying to make here is that this level of partisanship for such huge legislation is, based on my quick sampling, pretty rare. Look at the Iraq war, Social Security, No Child Left Behind, even the 1994 assault weapons ban saw pretty massive aisle crossing.

The funniest thing about health care reform is this: Not only was the the “yes” vote highly partisan, the “no” vote was actually somewhat bi-partisan. Nearly a fifth of the people who voted against health care reform were Democrats. So the “Republican” side of the issue managed to convince a number on the “Democrat” side, but the Democrats convinced exactly zero Republicans.

(Exception to the rule: Medicare Part D had a very close, party-line vote. But you still saw some Democrats crossing the line to vote with the Republicans.)

The reason I’m so riled up about this is because Jim Lehrer, whom I like and respect, basically accused the Republicans of having a history of short term opposition on social legislation.

For those who had not heard, Jim Lehrer, in an interview with Senator Jon Kyl, stated that:

Republicans have opposed things like Social Security, Medicare, even civil rights legislation, but then, once they lost, they took some deep breaths and moved on, and then finally ended up embracing many of these major changes…

Is that going to happen with health care reform?

UPDATE: A commenter below has graciously provided a link to the full transcript here.

Thankfully, Senator Kyl took him to task over that statement, but what would posses a journalist to make such an inaccurate statement? I’m going to go ahead and chalk it up to Lehrer simply not having the facts and not bothering to find out about them. He assumed that Republicans opposed that legislation because… um… I guess because Republicans are poopy doo-doo head who poo in their pants. Or something.

I would love to educate Mr. Lehrer and help him educate his viewers. If you’d like to help me with this, you can download one of the images above or use a link to this post and send it to the complaints department at PBS NewsHour.

Please be polite. I’d rather not be represented by rude people.