This is a companion piece to the previous post, so please read both of them. Here I’m going to lay out the script I had written for debunking the chart I created that asked the question “Does a Republican Congress Create More Jobs?” and then implied with a chart that this was indeed the case. I’ll walk through some process for creating charts and then talk about why I would create a chart that I was just going to debunk.

I apologize for the similarity to the post where I debunk the Obama stimulus chart. These two scripts were meant to be together.

How to Make Number Say Anything You Want

Do you want to convince people that your side is right with only the flimsiest proof? Does the idea of tricking people with numbers make you all happy inside? Then come join us as we walk through “How To Use Charts To Say Anything”

The first step is to grab the data that makes your point the best. Let’s use it to prove that a Democratic Congress is bad for jobs.

In the first case, the raw jobs data looks like this 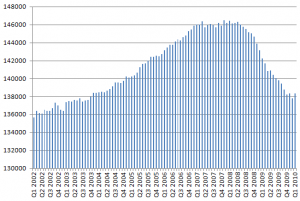 How did they do that? Was it magic?

Nope, we simply smoothed the data. The raw data is a little too chaotic and has too many data point to tell the straightforward story that we want. So instead, we’ll average the monthly data so that we have quarterly data. There… now we have some nice smooth straightforward data

Next, we pick some colors. Let’s make the Democrats blue dark and bold, give it a bit of an angry feel to it. This is our way of getting the audience to look at the democrats in a harsh way. We could try to soften up on the Republicans more, but too soft of a red would look pink and we don’t want that.

Let’s compare our colors to the Excel defaults:

Finally, and this is the most important part, only give information that is helpful.

Let everyone know that we saw 8 million jobs added to the economy while the Republicans were in charge and make a point to show that we lost 8 million jobs while the Democrats were in charge. But don’t mention that the Republicans took Congress only a year after 9/11 at a time when the job market was particularly low. Otherwise people will think it’s a “Well, they can’t fall off the floor” thing.

And make sure you don’t mention anything about the real estate market and how the bubble drove the labor market in a way that was clearly unsustainable. We don’t want the viewers to be confused with all these relevant details. We want them to say “Republicans good, Democrats bad”.

Everyone here was incredibly kind to put up with my bullshit chart for as long as I left it up without explanation. I’d like to say unequivocally: My chart is propaganda… just like the Obama administration’s chart. I was trying to use my chart as a visual talking point that said:

If you have no ethical qualms, data visualizations can be manipulated to say exactly what you want them to say.

But if we just play around with the data the right way, we get what seems to be a clear picture that portrays a correlation and gets on its hands and knees and begs us to draw causation from it. Most people will do exactly that.

I can spend hours walking patiently through what is wrong with the Obama administration’s chart. Let me recap the high points here:

But this kind of explanatory rebuttal would interest those already convinced. The chart I made had a power that an calm explanatory video wouldn’t have. Quite frankly, I hate that this is the case. Like President Obama’s chart, my chart doesn’t teach people anything about economics or lead people to learn important things about unemployment.

The only valuable thing my chart teaches is that charts can portray accurate data and still be manipulated to coach people along to poor conclusions. The only reason I even put my chart up is because it is the graphical equivalent of drawing out the Obama administration’s argument to its logical conclusion. My chart works with the same data, the same assumptions, and the same implications. And it leads to a completely different conclusion.

My point here is that it isn’t brilliant. It’s juvenile. It’s the chart equivalent of a crass political cartoon with a Snidely Whiplash mustache drawn on the bad guys. It’s a design trick imagined by cynical, self-congratulatory children fresh out of graduate school who pat themselves on the back for their ability to fool people who they think are too stupid to know the difference. They think they are special because they can get powerful people to flatter them for their ability to lie.

But they aren’t special. I can play that same childish game in my free time. The difference if that I want people to know that it’s a trick. They would rather see people fooled.